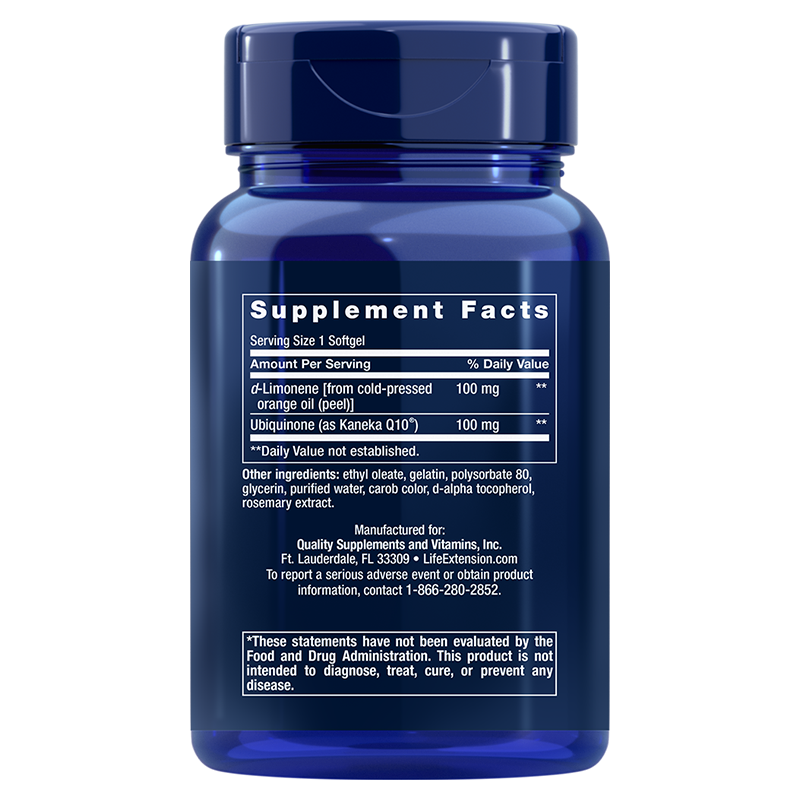 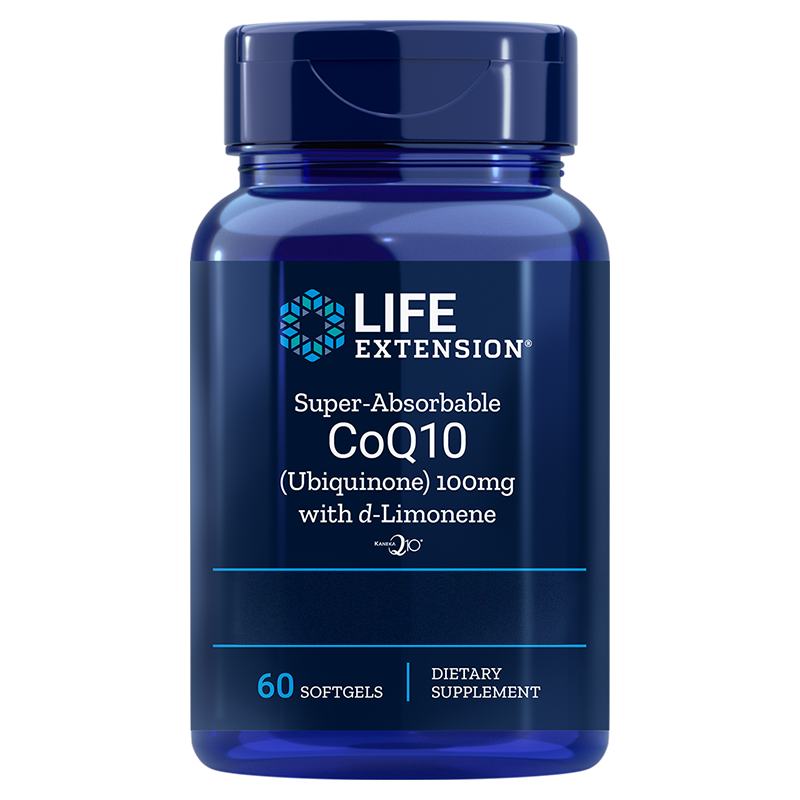 For you, if you are interested in promoting a healthy  heart and brain

The ingredients in Super-Absorbable CoQ10 (Ubiquinone) with d-Limonene can:

CoQ10 in Super-Absorbable CoQ10 (ubiquinone) with d-Limonene supports the energy-producing mitochondria in the cells and has higher absorbability than regular CoQ10 supplements.

Super-Absorbable CoQ10 (Ubiquinone) with d-Limonene is a super absorbable and very cost-effective CoQ10 supplement formula. CoQ10 plays an essential role in supporting a healthy mitochondrial function [1-7] because it is required in the body to convert fats and sugars into energy for the cells. However, as the body ages, the natural production of CoQ10 declines [8]. With ample levels of CoQ10 in the body the mitochondria can work efficiently in cells all over the body.

When CoQ10 supplementation is taken through the mouth, just some of it will be absorbed into the bloodstream. However, higher doses of CoQ10 can provide better effects than typical dosages. CoQ10 is a very expensive nutrient, why a viable option to taking higher doses is to increase the amount of CoQ10 which can be absorbed in the body.

CoQ10 is a potent antioxidant, which helps protect the DNA of mitochondria, lipids and proteins from oxidation. Furthermore, it also supports the function of mitochondria [11], which are the “powerhouses” of cells. It does so by contributing to the mitochondria’s production of ATP which is the body’s main source of energy. When the body starts to age, the production of CoQ10 decreases, which on the other hand can result in lower production of ATP. The good news is that CoQ10 can easily be supplemented.

Super-Absorbable CoQ10 (Ubiquinone) with d-Limonene contains CoQ10 in its ubiquinone form in a highly intensified format. The absorption of CoQ10 is aided by d-Limonene which is a natural compound found in orange oil. d-Limonene helps CoQ10 absorption by breaking down CoQ10 particles, reducing their size thereby increasing CoQ10 absorbability in the body [12-17].

CoQ10 is a vital component to the human body because it helps convert food into ATP, the body’s main source of energy. When CoQ10 levels are optimized in the body, the cells can therefore function optimally. Research indicates that CoQ10 supplementation is a very effective way to support various organs in the body, including eyes, kidneys, and brain [18-21].

CoQ10 comes in two forms: ubiquinone and ubiquinol. Most ubiquinone is converted to its active form ubiquinol when it enters the body. CoQ10 is essential in transferring food into ATP energy molecules which is the main type of energy used in the cells.

CoQ10 deficiency affects the cell mitochondria (the “powerhouses” of the cells) negatively. This is because CoQ10 plays an essential role in transporting electrons from food molecules into ATP molecules which creates energy for the cells [23, 24] Furthermore, CoQ10 deficiency has been linked to a number of age-related issues [23, 24].

Moreover, CoQ10 supplementation has also been found to be effective in increasing CoQ10 blood levels, and supporting the function of a diverse range of high-energy consuming organs such as the heart, brain, and kidneys.